Publisher’s Summary:
Aggie Morton lives in a small town on the coast of England in 1902. Adventurous and imaginative but deeply shy, Aggie hasn’t got much to do since the death of her beloved father . . . until the fateful day when she crosses paths with twelve-year-old Belgian immigrant Hector Perot and discovers a dead body on the floor of the Mermaid Dance Room! As the number of suspects grows and the murder threatens to tear the town apart, Aggie and her new friend will need every tool at their disposal — including their insatiable curiosity, deductive skills and not a little help from their friends — to solve the case before Aggie’s beloved dance instructor is charged with a crime Aggie is sure she didn’t commit.

Filled with mystery, adventure, an unforgettable heroine and several helpings of tea and sweets, The Body Under the Piano is the clever debut of a new series for middle-grade readers and Christie and Poirot fans everywhere, from a Governor General’s Award–nominated author of historical fiction for children.

Aggie Morton, Mystery Queen: The Body Under the Piano is a great start to a middle-grade mystery series. It’s based on the early life of the real-life mystery queen Agatha Christie.

Agatha (Aggie) Morton is a 12-year-old girl who chafes at the restrictions placed on a young girl in Edwardian England. At her nervous mother’s insistence, she still has a 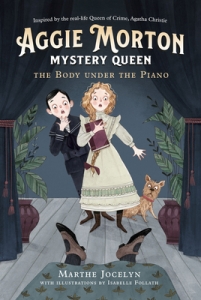 nursemaid who accompanies her everywhere. She’s still grieving her father’s recent death. Her only distraction is a new friendship with a young Belgian immigrant named Hector Porot. The two inquisitive children become fast friends after Aggie discovers a body in her dance studio, and they decide to solve the murder themselves.

This is a really delightful book. Aggie and Hector are great characters. The mystery is well done and very reminiscent of Agatha Christie’s stories. (I did guess the murderer about halfway through, but I’ve read a lot of mysteries and I think readers in the targeted age group will be thrilled with the big reveal.) There’s some examination of class and privilege. Aggie’s family is struggling a bit financially since her father’s death, but she still leads a very privileged life and is shocked to learn that a family servant is living in an unheated shack. Hector is an immigrant living on charity, so he’s treated with some suspicion by the town. There’s also some discussion on social changes, as Aggie’s dance teacher, who ends up being a suspect in the murder, is a suffragette and doesn’t believe that women need to be married.

This is a really fun book for middle grade readers, and it was an entertaining read for this adult too. It’s the sort of book I wish had existed when I was a kid, just starting out on reading Agatha Christie.

I received an ARC from the publisher through NetGalley.