These Witches Don’t Burn
By Isabel Sterling
Published May 28, 2019 by Razorbill

These Witches Don’t Burn is an urban fantasy that reminds me a little bit of Charmed. It’s a fun start to a new series.

Hannah is a witch living undercover in Salem, Massachusetts. Because of they’re concerned about anti-witch prejudice, her cover is very secretive and Hannah must keep 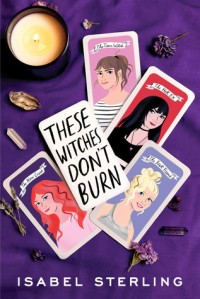 the fact that she’s an elemental witch from everyone outside the coven. When Hannah finds evidence of dark magic being practiced in Salem, she’s convinced that a blood witch has come to town and her coven in is danger, but no one seems to believe her.

I really felt for Hannah. She just wanted to have a fun summer, but now she’s investigating the weird stuff that’s happening in her own, her coven doesn’t believe her, the new cop in town thinks she’s responsible for all the trouble, and her ex-girlfriend won’t leave her alone.

The world-building in this book was great. I liked the idea of the three types of witches (elemental, caster, and blood) and the distrust between the different groups. There’s also an interesting examination of how the coven’s need for secrecy can be really problematic. Hannah is torn between trying to save a friend’s life and revealing her magic, a serious no-no for the coven. She chooses to save her friend and ends up being punished by the coven, which is pretty messed up.

This book is basically the queer witch trying to deal with her obnoxious ex (seriously, she’s the worst) while trying to solve a magical mystery and date the new girl in town story that I didn’t know I needed. And since it’s take place in summer, it feels like a perfect summer read.

I received an ARC from the publisher via Amazon Vine.

Romanov
By Nadine Brandes
Published May 7, 2019 by Thomas Nelson

The story of the fate of the the last Tsar of Russia and his family is one that is still fresh in the public consciousness. It’s been 100 years since their tragic deaths, but there are countless books on the topic. Romanov is a young adult version of the story with magic added. 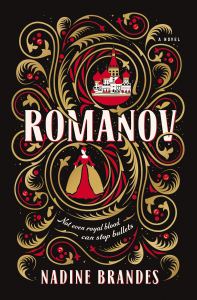 Grand Duchess Anastasia Nikolaevna of Russia (Nastya to her family) is imprisoned with her family after the Russian Revolution. She and her family don’t know what their fate will be. They expect that her father, the former Tsar, will be put on trial, or exiled to a remote part of Russia. The Tsar tells Nastya to guard a Matryoshka doll that contains a spell that will help the family. In this version of the revolution, the Bolsheviks are going around killing any spell masters, and the doll may hold the family’s last chance at salvation.

The first half of the book tells the story of the family’s imprisonment, first in Tobolsk, under conditions of some comfort, and then at Ekaterinburg, where the conditions were much grimmer. Nastya is the fourth of five children and the youngest daughter. She’s know in the family as imp (shvibzik) for her love of mischief and practical jokes. She works to keep her family’s spirits up, especially her brother Alexei, who is in constant pain from injuries related to his being a hemophiliac.

I enjoyed this part of the book. The sense of claustrophobia and the family’s uncertainty about the future are well done, and the sense of pervasive anxiety works well for the story. The family is hoping that the White Army (the counter-revolutionary forces) will rescue them, but with no news from outside their prison, everything is uncertain. The magical elements only come into play in the second half of the book. At that point, the tone changes quite a bit, as we go from historical events into the realm of the speculative. I enjoyed the magical elements, but I’m still not sure I like the way they were worked into the history. It was interesting, but it didn’t quite work for me.

Nastya is an entertaining character. I’ve always been interested in the real Anastasia (because of the legends that she survived her family’s slaughter), and her portrayal in Romanov feels true to life. She’s a bit of trouble-maker and acts before she thinks, but she loves her family and wants to do anything she can to save them. Her relationships with her father, Alexei, and the next oldest sister Maria are all very nicely done. Her romance with a Bolshevik guard is somewhat less convincing, but it’s at least historically probable as there are accounts of the Grand Duchesses having flirtations with the guards during their captivity.

There were a couple of historical inaccuracies that bugged me. Tsar Nicholas II is portrayed as a very saintly figure. And while yes, he was a loving husband and father, and he cared about his country, he was also a criminally incompetent ruler, and that’s really glossed over. The book is told through Anastasia’s point of view, so of course, she thinks highly of her father, but I wish there had been some acknowledgment that he was a less than ideal ruler. It’s also mentioned multiple times that Rasputin, the healer who held great influence over the imperial family because of his ability to help Alexei, was murdered by the Bolsheviks. Rasputin was actually murdered by another member of the Imperial family, an aristocrat, and a right-wing politician. But I’m a Russian history nerd, so this may not bother other readers.

I did enjoy the book, although I wish the magical elements had been a bit more integrated into the story from the start. The second half of the book is very exciting, and I liked how the author added magic to known historical events.

I received a complimentary copy of this book from Thomas Nelson through NetGalley. Opinions expressed in this review are completely my own.

The Lovely and the Lost
By Jennifer Lynn Barnes
Published May 7, 2019 by Freeform

Kira is a former feral child. She remembers almost nothing before the time she was rescued in the woods by Cady, her adoptive mother, just that she was on her own, trying to survive. Cady trains dogs for search-and-rescue, and she’s the best in the business. Kira, her brother Jude, and their friend and neighbor Free are all learning to train dogs for search-and-rescue. 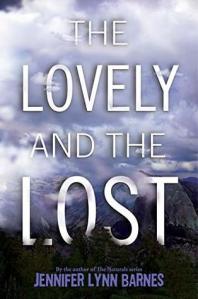 Cady is estranged from her father, but when she gets a call that he needs her help searching for a child who’s lost in a vast national park, she agrees to go home to help, and brings the kids along. Kira gets caught up in the search for the missing child, and it triggering fragments of memories. It soon becomes obvious that the missing child didn’t just wander off, she was kidnapped, so there’s a mystery element to the story.

The characters all have some baggage. Kira has PTSD from her traumatic childhood experiences. Even though she’s been living in a safe environment with a loving family for many years, the scars of her past are still there. She doesn’t like being touched, eye contact is hard for her, and she relates better to dogs than people. Cady hasn’t been back to her hometown in 18 years and has a fraught relationship with her father. Joining Kira in the search is local boy Gabriel, who has a criminal past and secrets of his own.

The book is fast-paced and very readable. I wasn’t really expecting this to be a mystery, but that part of the plot was very well done and left me guessing until the end. There were a lot of twists and turns, and whenever I thought I had things figured out, I was way off base.

Kira was a fascinating character. She can be prickly and difficult. She loves her family, but the emotional interactions are really difficult for her. Her PTSD is triggered by searching for the missing child, and she’s on edge for most of the book.

I found the info about search and rescue missions really interesting. The vastness of the wilderness where the child disappeared seems insurmountable, but the dogs and humans on the search team are able to do so much. It was really fascinating. I loved reading about the bonds between the searchers and their dogs.

I received an ARC from the publisher via NetGalley in return for an honest review.