City of Ghosts
By Victoria Schwab
Published August 28, 2018 by Scholastic

Victoria/V.E. Schwab is a prolific writer, with multiple adult and YA books, and now she’s turned to middle-grade fiction with City of Ghosts. I really enjoyed City of Ghosts, and I know my ghost-obsessed 10-year-old self would have LOVED it.

Cassidy sees ghosts. She almost drowned and was pulled out of the water by a ghost named Jacob, who becomes her best friend. She and Jacob can travel back and forth across the veil, a sort of gray area inhabited by ghosts. Even before she almost died, Cassidy knew a lot about ghosts because her parents are paranormal researchers who hunt gho 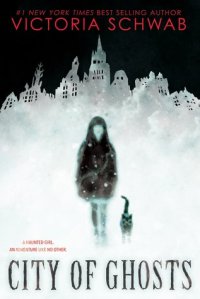 sts and have a successful series of books about the subject. This leads to the parents being offered a ghost-hunting TV, which takes them to the seriously haunted city of Edinburgh.

Edinburgh is wonderfully vivid in the book. Because her parents’ work takes them to the city’s most haunted places, Cassidy is confronted with many more ghosts than she’s even seen in one place, and she finds that the veil is very different here than what she’s used to. She also meets a another girl, Lara, who can see ghosts, and she begins to learn what power and responsibility she has.

This book is genuinely scary. The ghosts are Edinburgh are often creepy and terrifying. The scariest of all is a woman in a red cloak, who’s said to have stolen children. Ever since her near-death experience, Cassidy has been drawn to the veil, but the pull is much stronger in Edinburgh, and although Lara admonishes her to avoid the woman the red cloak, Cassidy keeps crossing her path, with terrible consequences.

I liked the friendships in this book very much. Cassidy is a bit of an odd duck, an outsider at her school, but she doesn’t mind. She and Jacob are best friends who have each other’s backs, and she doesn’t need anyone else. But there’s some distance in the relationship too, as there are things Jacob doesn’t share with Cassidy, like how he died and why he’s still here. When she first meets Lara, the other girl is very dismissive of her, but once Lara realizes that she and Cassidy share their unique talent, they forge a somewhat testy relationship.

This is a great middle-grade book. As an adult reader, I enjoyed it, and I think kids in the target age group will love it.

I received an ARC for review from Amazon Vine.

It’s #tuesdayswithjane, and isn’t this little Jane Austen tray cute? I like how it looks with my Arcturus editions. I’m very excited for the new Emma movie, and I think a reread may be in order. • QOTD: Are you a rereader or not? • I reread a lot, but I’m trying to cut back because there are so many books I haven’t read. • • #bookish #booklover #instabooks #booksofinstagram #booknerd #bookworm #bibliophile #readersofinstagram #igreads #igbooks #bookaholic #bookobsessed #janeausten #emmajaneausten
One of my reading goals for this year is to read more diverse books, and in February, I’ve been making an effort to read some books by African-American authors since it’s Black History month. I finished Giovanni’s Room by James Baldwin over the weekend. I struggled a bit with this book. Baldwin is a phenomenal writer and his prose is so good there were passages I read multiple times, just drinking in the words. But it’s a very depressing book, as it’s about a man who struggles with his sexuality and the chaos of his personal life. Still, I’m glad I read it and it makes me want to read more Baldwin. • QOTD: Do you have anything fun on your agenda this week? • I don’t have much going on, but I’m hoping to make it to a used book sale at the end of the week. • #bookish #booklover #instabooks #booksofinstagram #booknerd #bookworm #bibliophile #readersofinstagram #igreads #igbooks #bookaholic #bookobsessed #giovannisroom #jamesbaldwin #africanamericanauthors
A few Penguin Drop Caps for #shelfiesunday. I resisted this collection for a long time, but it won me over in the end. • • #bookish #booklover #instabooks #booksofinstagram #booknerd #bookworm #bibliophile #readersofinstagram #igreads #igbooks #bookaholic #shelfie #shelfiesunday #penguinclassics #penguindropcaps #classics #classicbooks
I hope your Saturday is off to a good start. I’m sitting outside my son’s musical theater class and trying to read Giovanni’s Room by James Baldwin. Baldwin is an amazing writer, but I’m finding it hard to get through because it’s very depressing. I’m about two-thirds done, and I’m hoping to finish it today. • QOTD: What are you currently reading? • In addition to Giovanni’s Room, I’m reading The Midnight Lie by Marie Rutkowksi and Stalking Jack the Ripper by Kerri Maniscalco. • • #bookish #booklover #instabooks #booksofinstagram #booknerd #bookworm #bibliophile #readersofinstagram #igreads #igbooks #bookaholic #shelfie #shelfiesunday #bookspines