Sparks of Light (Into the Dim #2)
Janet B. Taylor
Published August 1, 2017 by Houghton Mifflin

Our heroine, Hope Walton, is recovering from her terrible experiences in 12th century London. She’s found a home with her mother’s family in the Scottish Highlands, and 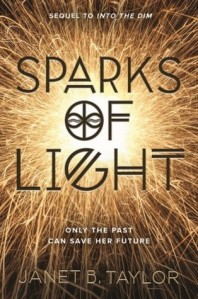 she’s taken her place in the Viators, the group of time travelers. He mother and baby sister are safely back in the 21st century, although her mother is suffering from PTSD from the trauma she experiences while stuck in the 12th century. Hope’s love interest Bran shows up to alert the Viators that his mother, the Viator’s evil nemesis Celia, is plotting to get her hands on a device from 1895 that could give her enormous time-traveling power, something the Viators want to prevent.

The book gets into the action very quickly, and Hope and friends are soon on their way back to 1895 in New York City, at the height of the Gilded Age. Hope poses as a wealthy heiress and stays at the Waldorf-Astoria Hotel, where she meets such real-life socialites as Consuelo and Alva Vanderbilt and the inventor Nikola Tesla. The author has clearly done her research, and I really enjoyed her descriptions of 1895 New York, where the Viators see everything from dire poverty to unimaginable splendor.

Things quickly go wrong, and some of the party are trapped in a mental institution. This part of the book is particularly harrowing. Mental health care in the late 19th century is not for the faint of heart, and the “treatments” are horrible. Some of the patients are genuinely ill, but many of them seem to be perfectly healthy people who have been shut away for being “inconvenient.” Mental health care in the 21st century still has a long way to go, but it’s light years ahead of the supposedly scientific treatments of the late 19th century. As awful as the hospital is, it’s a private hospital with some semblance of luxury. I can only imagine how awful a public hospital would have been at this time. The book really makes it clear that being a woman at this time was pretty awful (and it’s also not a good time for the one POC member of the team, Doug, who experiences some virulent racism).

I did have a few issues with the book. A new character is introduced, Gabriella. She’s an old friend of Bran’s, and although Bran show nothing beyond friendly feelings for her, Hope is instantly insanely jealous of her. Gabriella shows up at the beginning and the end of the book, and she’s really underdeveloped. Also, Hope is still mad at her mother for keeping so many secrets from her during her childhood, but this isn’t really explored. I would have liked to see a scene where Hope and her mother has things out. The villain from the first book, Celia, is spoken of often, but she never appears on the page, and we meet some new villains instead. The new villains only show up near the end, and we don’t know much about them, so they felt a little weak compared with Celia in the first book. But these are all minor complaints, and I imagine these issues might be resolved in the next book.

Overall, I really enjoyed Sparks of Light, and it made me feel very happy that I wasn’t a woman living in 1895.

I received an ARC from Amazon Vine.

It’s #tuesdayswithjane, and isn’t this little Jane Austen tray cute? I like how it looks with my Arcturus editions. I’m very excited for the new Emma movie, and I think a reread may be in order. • QOTD: Are you a rereader or not? • I reread a lot, but I’m trying to cut back because there are so many books I haven’t read. • • #bookish #booklover #instabooks #booksofinstagram #booknerd #bookworm #bibliophile #readersofinstagram #igreads #igbooks #bookaholic #bookobsessed #janeausten #emmajaneausten
One of my reading goals for this year is to read more diverse books, and in February, I’ve been making an effort to read some books by African-American authors since it’s Black History month. I finished Giovanni’s Room by James Baldwin over the weekend. I struggled a bit with this book. Baldwin is a phenomenal writer and his prose is so good there were passages I read multiple times, just drinking in the words. But it’s a very depressing book, as it’s about a man who struggles with his sexuality and the chaos of his personal life. Still, I’m glad I read it and it makes me want to read more Baldwin. • QOTD: Do you have anything fun on your agenda this week? • I don’t have much going on, but I’m hoping to make it to a used book sale at the end of the week. • #bookish #booklover #instabooks #booksofinstagram #booknerd #bookworm #bibliophile #readersofinstagram #igreads #igbooks #bookaholic #bookobsessed #giovannisroom #jamesbaldwin #africanamericanauthors
A few Penguin Drop Caps for #shelfiesunday. I resisted this collection for a long time, but it won me over in the end. • • #bookish #booklover #instabooks #booksofinstagram #booknerd #bookworm #bibliophile #readersofinstagram #igreads #igbooks #bookaholic #shelfie #shelfiesunday #penguinclassics #penguindropcaps #classics #classicbooks
I hope your Saturday is off to a good start. I’m sitting outside my son’s musical theater class and trying to read Giovanni’s Room by James Baldwin. Baldwin is an amazing writer, but I’m finding it hard to get through because it’s very depressing. I’m about two-thirds done, and I’m hoping to finish it today. • QOTD: What are you currently reading? • In addition to Giovanni’s Room, I’m reading The Midnight Lie by Marie Rutkowksi and Stalking Jack the Ripper by Kerri Maniscalco. • • #bookish #booklover #instabooks #booksofinstagram #booknerd #bookworm #bibliophile #readersofinstagram #igreads #igbooks #bookaholic #shelfie #shelfiesunday #bookspines