My history with this book
None. Lois Lowry is an award-winning author, and her Anastasia Krupnik series was first published when I was in the right age group to read it, but I wasn’t aware of this series until recently. I read Lowry’s The Giver a few years ago and liked it very much, so I decided to give Anastasia a try.

Anastasia Krupnik has a bit in common with the Ramona books and it also reminded me of some of Judy Blume’s work. Anastasia a smart, funny 10-year-old, who lives with her parents in an apartment in Boston (fitting into the 1970s trend of books about city kids who live in apartments, although it’s usually New York, so Boston is a nice change). Her father is a poet and English professor and her mother is an artist, so they’re slightly bohemian.

Anastasia faces some challenges in her life. Her parents announce that they’re expecting a baby boy, and she’s not thrilled about that. She has conflicted feelings about her grandmother, who’s suffering from dementia. She thinks she may be in love for the first time.

This is a sort of a slice of life book. There’s not a huge amount of plot, and it’s mostly about Anastasia coming to terms with the impending birth of her brother. I really enjoyed the book, and there are some very funny bits, like these two passages::

“Well,” said her father, “my vacation doesn’t start until day after tomorrow. But I only have to teach one class this morning. Do you want to come along?”

“Will it be boring?”

Her father adjusted his glasses so that he could look down his nose at her. “Boring? Dr. Krupnik’s English 202, required for English majors, eighteenth and nineteenth century poetry, three prelims, four papers, and a final exam, boring? He sighed. “Yes, it will probably be boring.”

And this one, where Anastasia’s father responds to a student he clearly finds very annoying:

“That’s very interesting, Miss Eisenstein,” said her father. But he said it with the same voice he used when Anastasia described in detail the plot of a television program. It meant he didn’t find it terribly interesting at all.

There’s a rather rough scene in the first chapter where Anastasia has to read a poem she’s written out loud in class. It’s a pretty amazing poem for a 10-year-old to have written, but Anastasia didn’t follow the teacher’s instructions to write a poem that rhymes, so she gets an F, which her teacher announces in front of the entire class. I was also a creative kid who didn’t always follow directions to the letter, so I sympathize with her. 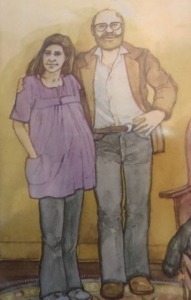 Anastasia Krupnik feels a bit dated; there are a lot of things in it that are very 1970s. When Anastasia visits her father’s class, both her father and his students smoke. Anastasia asks her mother if she ever had a love affair before she got married, and her mother tells her all about a failed romance (not that this conversation couldn’t happen now, but something about it felt very 70s). Anastasia develops a crush on a boy who wears in a comb in his hair at all times and likes Roberta Flack. These details were nostalgic for me, but I wonder how they will register for a kid today.

The edition I read is apparently the original cover, and I like how much it references the book. There’s Anastasia, wearing her Amelia Earhart t-shirt and her big 70s glasses, writing in her special notebook, surrounded by lots of discarded poems. It’s very true to the book. And check out how groovy her parents look on the back cover. Her dad could be a minor character in Woody Allen’s Manhattan.

Would I want my kid to read it?
Sure.

Can you read it aloud?
Yes, although the chapters are a little long.

Availability
It’s still in print and available as an ebook.